The hydroboration-oxidation reaction is a two-step reaction that converts an alkene into a neutral alcohol by the net addition of water across the double bond. The hydrogen and hydroxyl group are added in a syn addition leading to the cis configuration. Hydroboration-oxidation is an anti-Markovnikov reaction, with the hydroxyl group attaching to the less substituted carbon. In first step Addition of Hydroborate group is done and in next step, it is oxidized by hydrogen peroxide.

For example: - When propene undergoes hydroboration-oxidation reaction, then it produces propan-1-ol as product. In this reaction diborane i.e., (BH3)2 reacts with propene, which in result generates trialkyl borane as an addition product. Then trialkyl borane is oxidised, by using hydrogen peroxide in the presence of aqueous sodium hydroxide to form alcohol, as final product. 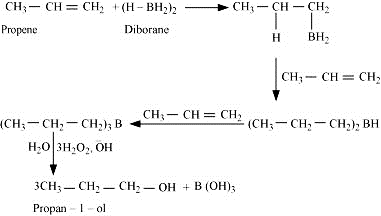