The two possible causes due to which overloading of an electrical circuit takes place are:

i. When a number of appliances are connected to a single socket, this causes overloading and can cause heating too. 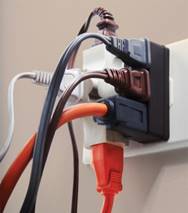 ii. Overloading occurs when live and neutral wires come in direct contact with each other. This causes a short circuit too.

The two precautions that should be taken to avoid the overloading of the domestic electric circuit is:

i. To use thick wires instead of thin wires because thin wires cannot bear a current with overloading. On the other hand, thick wires have the capacity to bear current.

ii. Avoid connecting of number of appliances in the same socket.

How useful is this solution?We strive to provide quality solutions. Please rate us to serve you better.
PREVIOUSAn object is placNEXTTwo resistors, wi
Related Videos

Why the bulb gets

What is Joule’s h

How does use of a

You are given a r