The inflationary gap or the expansion gap determines the difference between the actual output and the potential output. 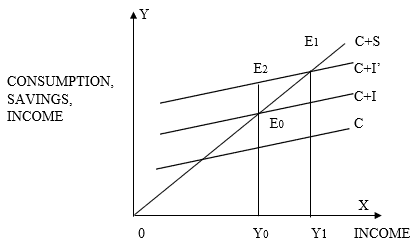 In the following diagram, the level of income in the economy is Y0 at the point of intersection of the C+I and the C+S curves. The equilibrium point at Y0 level of income is E0. When the total investment expenditure in the economy increases, the consumption curve shifts upwards and forms the C+I’ curve. The equilibrium point will be E1 with the equilibrium income being Y1 at the intersection of the C+S curve and the C+I’ curve.

• Increase the total output: This can be done only by raising the productive capacity of the labour force or improvements in the level of technology. When the total output is increased according to the increase in expenditure, the stock would be sufficient to meet the needs of the public thus reducing the gap between the actual and the potential output.

The aggregate demand function in a closed economy can be represented by the following equation:

The aggregate demand function in a closed economy can be represented by the following equation: