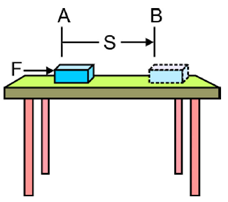 Let us assume that an object of mass(m) is at rest on a smooth horizontal plane as shown above . Let it be displaced through a distance ‘s’ from the point A to B by force(F) acting upon it in the direction of the displacement. In the horizontal direction the net force

is equal to the applied force F.

The relation between initial velocity u, final velocity v, acceleration ‘a’ and displacement ‘s’ is given from the equation of motion as

By newton’s second law of motion

Note:- A Special case is when the object is initially at rest i.e u = 0 ,In that particular case ,Formula of Kinetic Energy comes to be K.E =

How useful is this solution?We strive to provide quality solutions. Please rate us to serve you better.
PREVIOUSWhy does a person standing for a long time get tired when he does not appear to be doing any work.NEXTA free-fall object eventually stops on reaching the ground. What happens to its kinetic energy?
Related Videos

A cycle together with its rider weighs 100kg. How much work is needed to set it moving at 3 m/s.

When the speed of a ball is doubled its kinetic energy

(a) the initial potential energy of the ball ,

(b) the kinetic energy just before it reaches the ground

(c) the speed just before it reaches the ground.

Find the mass of a body which has 5J of kinetic energy while moving at a speed of 2m/s.

Write down the concentration of each of the following solutions in g/L and mol/L.

Determine which of the following polynomials has (x + 1) a factor:

Use the Factor Theorem to determine whether g(x) is a factor of p(x) in each of the following cases:

Give reasons for the following observations:

(a) Naphthalene balls disappear with time without leaving any solid.

(b) We can get the smell of perfume sitting several metres away.