Aim: To study the factors on which resistance of conducting wires depends.


1. Connect the cell, an ammeter and plug key in series with nichrome wire in the gap XY as shown in the figure below. 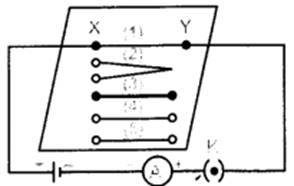 2. Close the key and note the reading of ammeter. It measures the current ‘I1’ through the nichrome wire (marked ‘1’).


3. Replace the marked 1 wire with another nichrome wire having same area of cross-section (thickness) but of double length’2l’ (marked 2).


4. Note the ammeter reading (I2) again after closing the key.


5. Again replace the marked 2 wire with marked 3 wires which have the same length but are thicker than marked 1 and 2 nichrome wires. Again note down the current (I3) through this wire.


7. Plug the key again and note the ammeter reading. It measures the current (I4) through copper wire.


8. Repeat the experiment with iron wire and measure the current (I5).

2. Current I3 increases when thicker wire of same length and of same material
i. e., nichrome is used.


3. Current I4 and I5 is different for copper and iron wire.


2. First observation indicates that the resistance of the conductor increases with increase in length. So, resistance is directly proportional to length.


3. Second observation shows that thicker wires have lesser resistance. So, resistance is inversely proportional to area of cross section of the wire.


4. Third observation shows that resistance of the conductor depends on the nature of its material.

In a series combi

What is the equiv

Why are copper an

How does the Cons