What happens to the force experienced by a current carrying conductor placed in a uniform magnetic field, when placed
(a) parallel to magnetic field?

(b) perpendicular to magnetic field?


•Length of the wire which remain in magnetic field


•And the angle between the current carrying conductor and magnetic field.


(a) parallel to magnetic field


(b) perpendicular to magnetic field

Quiz | Find the Magnet and its Poles.34 mins

Foundation | Trajectory of an Electron in Magnetic Field41 mins

What will the polarity be one end of a solenoid if the current appears to be flowing anticlockwise in it?

The diagram shows a coil of wire wound on a soft iron core forming an electromagnet. A current is passed through the coil in the direction indicated by the arrows. Mark the N and S-poles produced in the iron core.

Explain with the help of a labelled diagram the distribution of magnetic field due to a current through a circular loop. Why is it that if a current carrying coil has n turns the field produced at any point is n times as large as that produced by a single turn?

Meena draws magnetic field lines of field close to the axis of a current carrying circular loop. As she moves away from the center of the circular loop she observes that the lines keep on diverging. How will you explain her observation?

In the simple electric motor of figure given below, the coil rotates anticlockwise as seen by the eye from the position X when current flows in the coil. 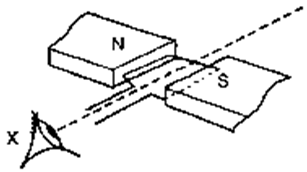 Is the current flowing clockwise or anticlockwise around the coil when viewed from above?