The emissions of chlorofluorocarbons (CFCs) from some industries and from household consumer products such as refrigerators and air conditioning systems. These gases bring chlorine and bromine to the stratosphere, which cause depletion of the ozone layer.

Step 2. CFCs rise into the ozone layer in the stratosphere.

Step 4. The free chlorine atoms react with ozone, to convert it to plain molecular oxygen. One chlorine atom can destroy up to 15,000 ozone molecules. In this manner even, minute quantities of CFCs reaching the stratosphere can be disaster for the ozone layer.

Step 5. A depleted ozone layer means that more UV radiations can get through it.

Step 6. More UV radiations coming to the earth has harmful effects on humans, animals and plants. 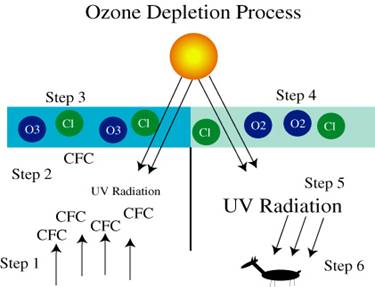 How useful is this solution?We strive to provide quality solutions. Please rate us to serve you better.
PREVIOUSWhat do you underNEXTWhy could we say
Try our Mini CourseMaster Important Topics in 7 DaysLearn from IITians, NITians, Doctors & Academic Experts
Dedicated counsellor for each student
24X7 Doubt Resolution
Daily Report Card
Detailed Performance Evaluation
view all courses