An ecological pyramid is a graphical representation between organism in an ecosystem. It is also known as Energy pyramid Each of the bars that make up pyramid represents a different trophic level, and their order , which is based on who eats whom, represents the flow of energy.

There are three types of Pyramids:

• This has large number of primary producers with smaller trophic level perched on top.

• Ecosystem found on land mostly have pyramid of biomass.

• The top of the pyramid has very less amount of biomass.

• It is graphical structure representing the flow of energy through each trophic level of a food chain over a fixed part of the natural environment.

• It is useful in quantifying the energy transfer from one organism to another along the food chain.

• Energy decreases as one moves through the trophic levels from the bottom to the top of the pyramid. Thus, the energy pyramid is always upward. 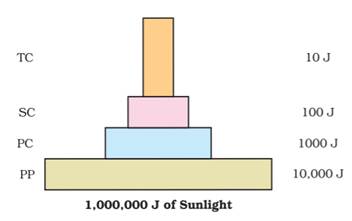 • In this the no.of individuals decreases from the lower level to the higher level.

• The no.of producers (1˚producers) is quite less than that of grass.

• Then ,there are the 1˚carnivores e.g.:rat whose number is far less than the grasshoppers.

• The next trophic level is the secondary consumers such as snakes who feed on rats.

• Then , there are the top carnivores such as the Hawks, who eat snakes and whose number is less than the snakes. 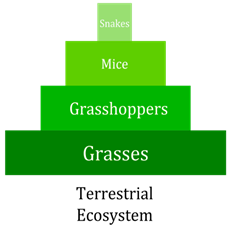 (a) Indiscriminate human activities such as alien species invasion, fragmentation and habitat loss have accelerated the loss of biodiversity. Justify by taking one example for each.

(b) State the importance of (i) IUCN Red data list and (ii) Hot spots in conservation of biodiversity.

When large habitats are broken u into small fragments due to various human activities, mammals or birds requiring large territories and certain animals with migratory habits are badly affected.

• When alien species are introduced unintentionally or deliberately for some purpose, some of then turn invasive and cause decline /extinction of indigenous species.

• For e.g: The introduction of African catfish( Clarias garpinus) (for aquaculture purpose), poses threat to indigenous catfishes in our rivers.

• The Nile Perch introduced into the lake Victoria in East Africa lead to the extinction of more than 200 species of Cichlid fish in the lake.

The Amazon rain forest is being cut and cleared for cultivating soybeans/ conversion to grasslands for raising cattle.

Solution (b): (i) IUCN- International Union for the Conservation of Nature.

(ii) Biodiversity Hotspot: is a biogeographic region that is both a significant reservoir of biodiversity and is threatened with destruction.

The importance of biodiversity hotspot is was follows;

• Regions with very high levels of species richness, high degree of endemism/ species confined to that region and not found anywhere else are identified which need to be conserve al priority basis.