What does an Ecol

The three different types of ecological pyramids that are usually studied are (a) pyramid of number; (b) pyramid of biomass and (c) pyramid of energy.

Examples of these upright pyramids are as follows:

a) Pyramid of Number:

b) Pyramid of biomass:

Pyramid of biomass is also seen in grassland ecosystems as there is a gradual decrease in biomass of organisms at each successive level from the producers to the tertiary consumers.

Organisms on the lower levels maintain a stable population and transfer energy up the pyramid. Pyramid of energy is always upright because when energy flows from one trophic level to the next trophic level, some energy is always lost as heat at each level. This is seen in the example of a grassland ecosystem. 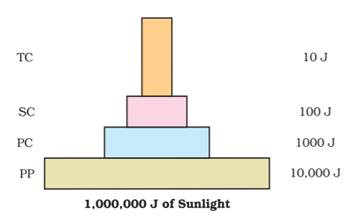 (a) One example each of the factors that have accelerated loss of biodiversity is:

a) Alien species invasion: When alien species invade and cause decline or extinction of indigenous species. The recent illegal introduction of the African catfish called Clarias gariepinus for aquaculture purposes is a threat to the indigenous catfishes in our rivers.

b) Fragmentation: When large habitats are broken up into small fragments due to various reasons, mammals and birds requiring large territories and certain animals with migratory habits are affected, leading to decline in their population.

c) Habitat Loss: An example of habitat loss is of the tropical rain forests. Once covering more than 14 per cent of the earth’s land surface, these rain forests now cover just 6 per cent.

(b) The importances of the following in conservation of biodiversity are as follows:

i) IUCN Red data list: The IUCN Red List documents the extinction of 784 species over the last 500 years. Analysis of these records show that extinctions across taxa are not random; some groups like amphibians appear to be more vulnerable to extinction. Other facts which can be concluded is that more than 15,500 species world-wide are facing the threat of extinction.

ii) Hot spots: Some regions around the world need maximum protection because they have very high levels of species richness and endemism. These regions are called hot spots. These hotspots are also regions of accelerated habitat loss. Example of a hotspot is Western Ghats.