What conditions are needed for static friction to come into play?

Conditions required for static friction to come into play are:

1. A force needs to be applied to the object being considered.

2. The applied force should not be able to move the object. It should be less than maximum static friction.

Consider an object M of mass m kg. Consider a force F acting on the object. 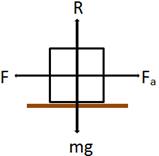 In the above figure, Fa is the frictional force on the object.

For static friction to exist, Fa>F.

How useful is this solution?We strive to provide quality solutions. Please rate us to serve you better.
PREVIOUSWhat ways do you suggest to reduce friction?NEXTGive examples of practical application of static friction.
Related Videos

Quiz on Are you an expert in Friction?28 mins

Give examples of practical application of static friction.

Give examples showing the existence of sliding friction.

What kinds of friction do you know?

Draw a free body diagram (FBD) to show various forces acting on a body which is sliding on an inclined plane.

What conditions are needed for static friction to come into play?

When you push a heavy object, it doesn’t move. Explain the reason in terms of net Force.