What are the main functions of money? How does money overcome the shortcomings of a barter system? 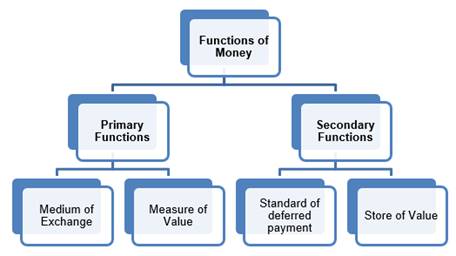 (1) Medium of Exchange - It facilitates buying and selling of goods and services so the exchange has become very simple and it can be conducted on a large scale.

(2) Measure of Value - Measurement of the value of goods being exchanged was very difficult in barter system due to lack of common unit of account but this difficulty is removed by the introduction of money. Now every good and services can be valued in terms of money.

(1) Standard of deferred payment - Money has made deferred payments much easier than before. When we borrow money from someone we will return it along with interest. It was difficult to make such transaction in terms of goods or services in barter system.

(2) Store of Value - Storing wealth is quite easy with introduction of money. It was not convenient to store value in barter system because goods are perishable.

Money overcomes the problem of barter system by replacing the C-C economy with monetary economy (where C-C stands for commodity to commodity).

•When there was no money, it was difficult to give common unit of value to goods or commodities, but now every goods and services can be measured in terms of money.

•Money facilitates the contractual future payments which were impossible at the time of barter system.

•Money facilitates store of value, which was not possible in barter system due to perishable nature of goods.

How useful is this solution?We strive to provide quality solutions. Please rate us to serve you better.
PREVIOUSWhat is a barter system? What are its drawbacks?NEXTWhat is transaction demand for money? How is it related to the value of transactions over a specified period of time?
Related Videos

Explain how 'Reverse Repo Rate' can be helpful in controlling credit creation.

Explain the role of the cash reserve ratio in controlling credit creation.

Explain how 'Repo Rate' can be helpful in controlling credit creation.

Explain the 'medium of exchange' function of money. How has it solved the related problem created by barter?

Explain the 'standard of deferred payment' function of money. How has it solved the related problem created by barter?

Describe the conflict of emotions felt by Eveline on the day she had decided to elope with Frank.