6. What is inside atom

What are the limitations of J.J. Thomson's model of the atom?


Class 9thAP - Physics & Chemistry6. What is inside atom

J.J Thomson considered atom as sphere of uniform distributed positive charge and electrons are embedded in it as shown in figure. 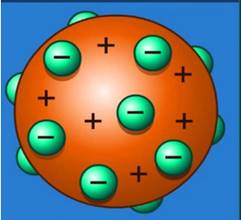 The Limitation of this model are as follows.

1. J.J Thomson's model of the atom could not explain the results of Alpha particle scattering experiment carried out by Rutherford.

3. J.J Thomson's model of the atom was just based on imagination it did not have any experimental evidence in its support like the Rutherford's Model of the atom.

How useful is this solution?We strive to provide quality solutions. Please rate us to serve you better.
PREVIOUSCompare the characteristics of electrons, protons and neutrons.NEXTWhat were the three major observations Rutherford made in the gold foil experiment?
Related Videos

What is in our blood?42 mins

What is cancer?37 mins

What is Upthrust and Buoyancy?40 mins

What are the limitations of J.J. Thomson's model of the atom?

Buildings collapsed at the foothills of the Himalayas because of an earthquake. Before collapsing they were moving forward and backward.

Why was Kezia afraid of her father?

Assertion (A): Human resource is necessary for the progress of any country.

Reason (R): Investment in education and health of people can result in a high rate of returns in the future for a country.

Who were the people in Kezia’s family?

Give the equations of two lines passing through (2, 14). How many more such lines are there, and why?

Identify the wrong pair and rewrite the corrected one.

Write answers to the following questions and explain your answers.

Explain how the element sodium is monovalent.