The rate of change of momentum of body is directly proportional to force acting on it.

Example, a crickter acting as a fielder lowers his hand to catch the ball, to reduce the impulse (shown in picture below) 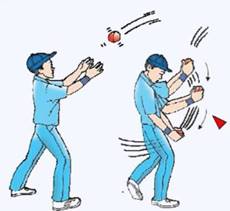 The common gadgets which are based on Newton’s 2nd law of motion:

i. Air bags: The air bags reduce the effects of force in a forward motion.

ii. Seat belts: A seat belt controls the motion of our upper body with the belt so that when the car stops, we do not hit our head.

How useful is this solution?We strive to provide quality solutions. Please rate us to serve you better.
PREVIOUSA feather oNEXTExplain an
Related Videos

A passenger in a