A fossil is the preserved remains of a dead organism from millions of years ago. Fossils are found in rocks and can be formed from:

• hard body parts, such as bones and shells, which do not decay easily or are replaced by minerals as they decay

• Parts of organisms that have not decayed because one or more of the conditions needed for decay are absent. For example, dead animals and plants can be preserved in amber, peat bogs, tar pits, or in ice

• preserved traces of organisms, such as footprints, burrows and rootlet traces - these become covered by layers of sediment, which eventually become rock 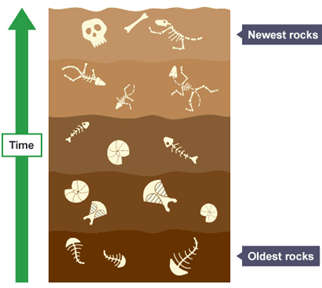 Fossil remains have been found in rocks of all ages. Fossils of the simplest organisms are found in the oldest rocks, and fossils of more complex organisms in the newest rocks. This supports Darwin's theory of evolution, which states that simple life forms gradually evolved into more complex ones.

Fossils tell us when organisms lived, as well as provide evidence for the progression and evolution of life on earth over millions of years.

Evidence for early forms of life comes from fossils. By studying fossils, scientists can learn how much (or how little) organisms have changed as life developed on Earth.

There are gaps in the fossil record because many early forms of life were soft-bodied, which means that they have left few traces behind. What traces there were may have been destroyed by geological activity. This is why scientists cannot be certain about how life began.

Fossils provide a snap shot of the past and allow us to study how much or how little organisms have changed as life developed on Earth.

EXPLANATION: Fossils are the preserved remains or traces of animals, plants, and other organisms from the past. Fossils range in age from 10,000 to 3.48 billion years old. The observation that certain fossils were associated with certain rock strata led 19th century geologists to recognize a geological timescale. Like extant organisms, fossils vary in size from microscopic, like single-celled bacteria, to gigantic, like dinosaurs and trees.