First we need to understand that what is moss , 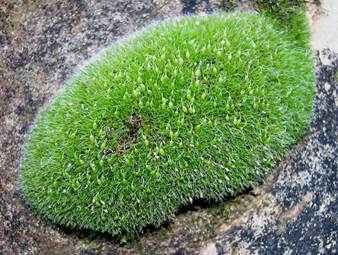 So it contains very less friction as it is damp.

As the friction is less so it is difficult to walk on it.

The person walking on the mossy surface slips because there is very less friction not enough to make us walk and hence when we push the ground backward we do not get much reaction due to which our feet gets backward and backward in order to get suitable reaction so we can move forward but after certain point our feet slips. The resultant net force also makes our feet to moves some extra backward on a mossy surface than a more friction surface like roads.