Arikamedu is an archaeological site in Southern India. It is located on the bank of the Ariyankuppam River. The excavated area of the hillock was distinguished into two zones on the basis of occupation and elevation.

• Red and black ceramics (known as megalithic stones or Pandukal) 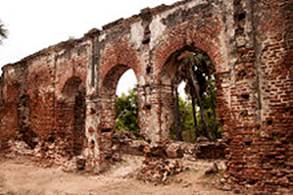 a) Revealed the width of expert planning.

b) Remains of the various buildings were found.

d) A similar wharf was unearthed in the successive excavation during 1997.

Keezhadi is a small village near Silaiman on the border between Madurai and Sivagangai districts in Tamil Nadu, India. The excavation in Keeladi revealed a Sangam era settlement dated to the 2nd century BCE by radiocarbon dating. archaeological excavation was carried out from Theni to Ramanathapuram.293 sites have been identified including Keeladi.

How useful is this solution?We strive to provide quality solutions. Please rate us to serve you better.
PREVIOUSStudent ActivitiesVisit a museum and collect information about inscriptions, coins and instruments used by the ancient people.NEXTStudent ActivitiesConduct a study on materials excavated from prehistoric sites and on Tamil - Brahmi script.
Related Videos

Visit a museum and collect information about inscriptions, coins and instruments used by the ancient people.

Conduct a study on materials excavated from prehistoric sites and on Tamil - Brahmi script.

Mark on the map of south India, the ancient Tamilagam and the territories of Tamil kingdoms.

a) Evidence of iron smelting has been found in Kodumanal and Guttur.

b) Periplus of Erythren Sea mentions about the pepper trade with India.

c) Punch marked coins are the earliest coins used in India mostly made of gold.

d) The Sangam Age has its roots in the Bronze Age.

___________ referred to the Westerners, including the Greeks, Romans and West Asian people.

___________ the classic work on economy and statecraft authored by Kautilya during the Mauryan period.

___________ refers to systematically digging a site to recover material evidence for exploring societies of the past.

(i) Coins as a medium of exchange were introduced for the first time in the Sangam Age.

(ii) Prakrit was the language used by the common people in Northern India during the Mauryan period.

(iv) The concept of Thinai is presented in the Tamil grammar work of Pathupaattu.

Together with Science 575 views
Q