Using Atlas, tell which of the following routes the IDL will be crossed and show them.

The International Date Line was constructed in 1884 to change the date and time according to the global travelling. But unlike the prime meridian, the IDL is not a straight line and does not pass through the land. If it was a straight line passing evenly through the continents, oceans and islands it would have resulted in the same places lying on both the sides of the meridian having different times. Thus the line was constructed in such a way that the parts of the same region were included in the same time zone. Thus the IDL was not a straight line passing through the land. 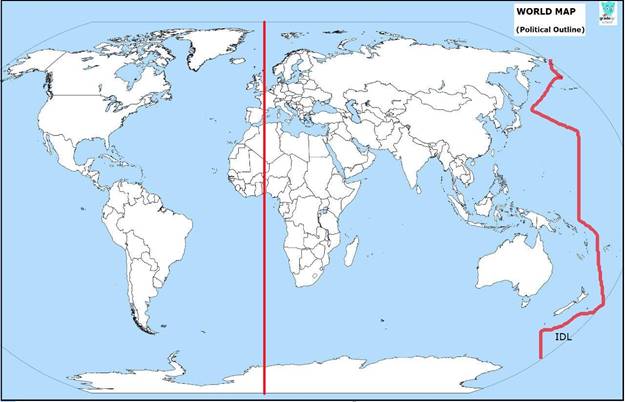 How useful is this solution?We strive to provide quality solutions. Please rate us to serve you better.
PREVIOUSWrite in brief.Why is the IDL considered with respect to 180 ̊ meridians only?
Related Videos

While crossing the IDL, a person will have to add one day when travelling from

Two boxes in different hemispheres are given in the following diagram. The IDL passes through both the boxes. In one box, the meridian, day and date is given. Find the day and date for the other box.

The day starts in the Pacific Ocean on the earth

According to the international convention, at which meridian does the day and date change occurs?

At which direction of the IDL does a new day start immediately?

IDL brings coordination in which of the following?

IDL is proving to be very useful in today’s times

While crossing the IDL, what changes will you make?

Why is the IDL not a straight line like the 180 ̊ meridians?