‘‘Use of heavy is

• To get to the conclusion that DNA followed a semi-conservative mode of replication, Meselson and Stahl grew E.coli in 15NH4Cl for many generations to get 15N incorporated into DNA.

• Then the cells were transferred into 14NH4Cl.

• The extracted DNA were centrifuged in CsCl and measured to get their densities.

• DNA extracted from the culture after one generation, 20 minutes showed intermediate hybrid density.

Mechanism of translation in prokaryotes:

• For initiation, the ribosome binds to the mRNA at the start codon (AUG) that is recognised only by initiator tRNA,

• In the elongation phase amino acid with tRNA sequentially bind to the appropriate codon on mRNA (forming complimentary base pairs with tRNA anticodon.)

• Ribosome moves from codon to codon along the mRNA and amino acids are added one by one in the two sites of the large subunit joined by peptide bond.

• Termination occurs when a release factor binds to the stop codon and releases the complete polypeptide. 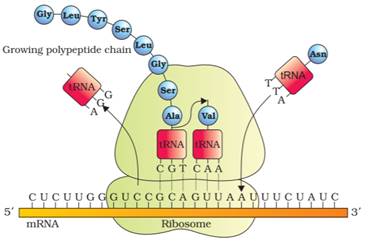