5. Plane Geometry and Line and Angle 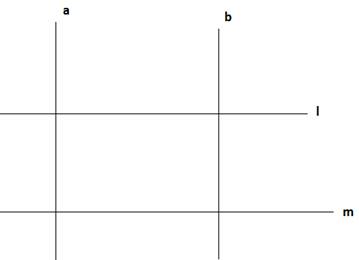 As both lines are perpendicular to parallel lines

The angle made by them on parallel lines will be 90°

Then taking one parallel line to be transverse

their corresponding will be equal

Then both lines are parallel.

How useful is this solution?We strive to provide quality solutions. Please rate us to serve you better.
PREVIOUSIn figure 5,35 DE || QR and AP and BP are respectively the bisectors of ∠EAB and ∠RBA Find the value of ∠APB.NEXTIn figure 5.36 AB || CD, CD || EF and y : z = 3 : 7 then find the value of x.
Related Videos

A Solid Grip on Basics of Coordinate Geometry49 mins

Take 5 examples from your surroundings and give explanation based on Newtons laws of motion.

A motorboat starting from rest on a lake accelerates in a straight line at a constant rate of 3.0 m s-2 for 8.0 s. How far does the boat travel during this time?

What was the main change brought about by the Bolshevik immediately after the October Revolution?