Two slits are made one millimetre apart and the screen is placed one metre away. What is the fringe separation when blue-green light of wavelength 500 nm is used?

How useful is this solution?We strive to provide quality solutions. Please rate us to serve you better.
PREVIOUSDefine power of a lens. Show that it is inversely proportional to the focal length of the lens.NEXTA message signal of frequency 10 kHz and peak voltage of 10 volts is used to modulate a carrier of frequency 1 MHz and peak voltage of 20 volts. Determine (a) modulation index, and (b) the side bands produced.
Related Videos

Questions Based on Constraint Motion - Back to 11th46 mins

B. A narrow beam of unpolarized light of intensity

is incident on a polaroid

Find the intensity of the light transmitted by


A. Explain two features to distinguish between the interference pattern in young’s double slit experiment with the diffraction pattern obtained due to a single slit.


B. A monochromatic light of wavelength 500 mm is incident normally on a single slit of width 0.2 mm to produce a diffraction pattern. Find the angular width of the central maximum obtained on the screen.


Estimate the number of fringes obtained in Young’s double slit experiment with fringe width 0.5 mm, which can be accommodated within the region of total angular spread of the central maximum due to single slit. (the wavelength of the light is given in mm but all the calculations are done using it as nm)

(a) If one of two identical slits producing interference in Young’s experiment is covered with glass, so that the light intensity passing through it is reduced to 50%, find the ratio of the maximum and minimum intensity of the fringe in the interference pattern.

(b) What kind of fringes do you expect to observe if white light is used instead of monochromatic light?

To ensure almost 100 per cent transitivity, photographic lenses are often coated with a thin layer of dielectric material. The refractive index of this material is intermediated between that of air and glass (which makes the optical element of the lens). A typically used dielectric film is MgF2 (n = 1.38). What should the thickness of the film be so that at the center of the visible spectrum (5500 Å) there is maximum transmission.

Four identical monochromatic sources A, B, C, D as shown in the (Fig.10.7) produce waves of the same wavelength and are coherent. Two receiver R1 and R2 are at great but equal distances from B. 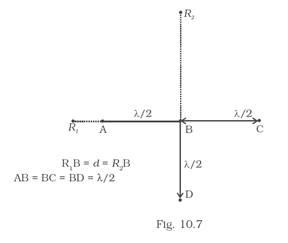 (i) Which of the two receivers picks up the larger signal?

(ii) Which of the two receivers picks up the larger signal when B is turned off?

(iii) Which of the two receivers picks up the larger signal when D is turned off?

(iv) Which of the two receivers can distinguish which of the sources B or D has been turned off?