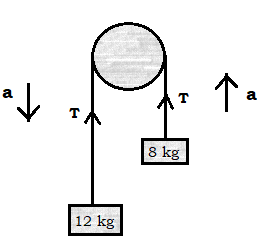 The system of masses and pulley has one smaller mass,’m’ and one larger mass, ‘M’.

‘T’ is the tension in the strings,

‘a’ is the acceleration of the masses.

According to the Newton’s second law of motion, we get equation of motion for each masses,


The acceleration of the masses is 2 m/s2


To find tension, We substitute the value of a from eq(iii) in eq(ii), we get:


The tension in the string when the masses are released is 96 N.