The diagram of the eye is: 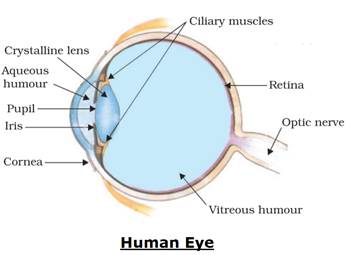 The eye is one of the most sensitive sense organs. An image is formed on the eye (on the light sensitive screen called retina) when light enters it. The entering of bright light till the formation of image is achieved by small events like

(i) First the light from a source enters the eye via the cornea which is thin membrane. Majority of the light is refracted at the outer surface of the cornea.

(ii) After refraction from the cornea, light strikes the pupil of the eye travelling across a watery fluid called the aqueous humor. The pupil decides the amount of light that will enter the eye. Pupil changes its size with the help of iris, a muscular diaphragm.

(iii) After passing through the pupil, light now strikes the crystalline lens. It is a thin convex lens responsible for focusing the light rays on the retina. The space between the lens and retina is filled by a watery fluid called the vitreous humor.

(iv) Retina is a light sensitive screen. It has 2 types of cells- rods and cons. These cells get activated upon illumination. The cells convert the light rays into electrical signals and transmit it to the brain via the optic nerve for processing.

The brain then perceives the information. All this happens within a matter of nanoseconds.

A person having s