15. National Liberation Movements in the Colonies

China can be divided into feudal, colonial, communist, semi-feudal, semi-colonial periods. The women, for no doubt, were inferior in all fields of life. Until the end of 19th-century women-conditions were intolerable in social, economic, political and family life.

To trace the changes in the role of women in China, it is important to know the women status before and after the 19th century.

Women in China- Before the 19th century

a) "Women with bound feet" was a compulsory custom for the female gender in China.

b) Small bound feet were considered beautiful while large unbound feet were judged crude in China and girls went through severe pain both mentally and physically throughout the process.

d) Majority of them were exposed to physical and mental torture, being harassed by family.

e) They had no social roles as they had no political rights.

f) They were not economically independent and had no source of income.

g) They had no right in property and inheritance

h) They totally depended upon father, brother, husband or sons throughout their life.

By the beginning of the 20th century, the Chinese communist party started a democratic revolution in China. The autocratic monarchy that had ruled China for over 2,000 years was overthrown in 1911 and led to the establishment of the Republic of China. The 1911 Revolution emancipated Chinese women.

Women in China- After the 19th-century

b) This historic liberation of Chinese women won worldwide attention.

c) A succession of movements was launched for women's liberation.

d) Chinese women waged a fearless struggle that lasted for over a century.

e) A series of policies on sexual equality was implemented.

f) The Reform Movement of 1898 leads the way to ban feet binding and establish schools for women.

g) The 1911 Revolution helped to start a feminist movement which fixed on equal rights for men and women and participation by women in political affairs.

h) These movements promoted the awakening of Chinese women.

i) Nevertheless, they all failed to bring about a fundamental change in their miserable plight as victims of oppression and enslavement.

When compared to the life of women in Russia, Chinese women were not at all extroverts in their social lives.

a) the experiences of women in Russia are significantly different across ethnic, racial, religious, and social lines.

b) The life of an ethnic Russian woman can be very different from the life of an urban, semi-urban woman because Russia is a multicultural society.

c) Women of eighteenth-century Russia were luckier than their European counterparts.

d) By the mid-nineteenth century, European notions of equality took a role in Russian women.

e) The Russian revolution in 1917 made important changes in the status of women.

f) Women in Soviet Russia became a vital part of the recruitment into the workforce, education sector, personal development, and training by the 20th century.

g) They were a vital part in the armed force in world war second.

c) Industrialization resulted in an increase in the number of female workers.

In short, The struggle for women to conquer their own group was part of a long historical process. The empowerment of women and their elevated social status were by revolutions and social reform movements in China, Germany, and Russia. It varies in a few prospects depending upon the cultural and geographical differences.

How useful is this solution?We strive to provide quality solutions. Please rate us to serve you better.
PREVIOUSMatch the following• Sun Yat-sen Militarised the nation• Chiang Kai-shek Environmental movement• Mao Zedong Nationalism Democracy and Socialism• Ken Saro Wiwa Peasant revolutionNEXTAfter the overthrow of the monarchy, China had two different types of regimes. How were they similar or different?
Related Videos

Who Won The Nobel Prize in Physics49 mins

Freedom struggle in these countries involved wars against the rulers. Briefly describe its impact.

Countries discussed in the above chapter were all mostly dependent on agriculture. What were the measures taken in these countries to change these practices?

After the overthrow of the monarchy, China had two different types of regimes. How were they similar or different?

Who owned industries in countries discussed above and what policies were brought in to change the systems? Make a table to compare them.

Unlike Vietnam or India, Nigeria did not have to struggle so hard for freedom. Can you find some explanations for this?

Compare the national movement in India and Nigeria - can you explain why it was stronger in India?

Complete the story in 150-200 words which starts like this:

“It was a quiet, cold and dark night like it usually is in winter when all retire to bed early. Suddenly at the dead of night, a shriek jerked the people in the building out of their beds. It was distinctly the voice of …………”

In a circular table cover of radius 32 cm, a design is formed leaving an equilateral triangle ABC in the middle as shown in Fig. 12.24. Find the area of the design (shaded region).

A car has two wipers which do not overlap. Each wiper has a blade of length 25 cm sweeping through an angle of 115°. Find the total area cleaned at each sweep of the blades.

In Fig. 12.25, ABCD is a square of side 14 cm. With centers A, B, C and D, four circles are drawn such that each circle touch externally two of the remaining three circles. Find the area of the shaded region. 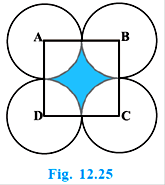 Once a carpenter went looking for a job He approached a building contractor and got a job at a decent salary and good working conditions. The carpenter was thrilled and determined to do his best. His boss provided him with tools and showed him the place where he was supposed to work.

At the end of the first day, the carpenter prepared fifteen doors. His boss was happy with his performance and congratulated him. The carpenter tried harder the. next day but he was able to prepare only 10 doors. The third day be tried even harder, but he could prepare only seven. Day after day he was preparing less and less doors.

"I must be losing my strength," the carpenter thought. He went to the boss and apologized, saying that he could not understand what was going on. ''When was the last time when you sharpened your tools?" the boss asked. "Sharpen! I had no time to sharpen my tools. I have been busy trying to prepare doors," said the carpenter. Most of us never update our skills. We think that whatever we have learned is enough.

•Complete the following sentences based on your reading of the passage in your own words.

(a) The carpenter approached the building contractor because

(b) The carpenter became extremely happy because he

(c) The boss congratulated him because

(d) His boss advised him

Read the passage below.

1. During our growing up years we as children were taught __ both at home and school __ to worship the photos and idols of the Gods of our respective religions. When we grew a little older, we were to read holy books like the Bhagwad Gita, Bible and Quran; we were told that there are a lot of life lessons to be learnt from these holy books. We were then introduced to stories from our mythologies which taught us about ethics and morality __ what is good and what is bad. I also learnt to be respectful towards my parents who made my life comfortable with their hard work and love and care, and my teachers who guided me to become a good student and a responsible citizen.

2. Much later in life, I realised that though we learn much from our respective holy books, there is a lot to learn from our surroundings. This realisation dawned upon me when I learnt to enquire and explore. Everything around us __ the sun, the moon, the stars, rain, rivers, stones, rocks, birds, plants and animals __ teach us many valuable life lessons.

3. No wonder that besides the scriptures, in many cultures nature is also worshipped. The message that we get is to save our environment and maintain ecological balance. People are taught to live in harmony with nature and recognise that there is God in all aspects of nature.

4. Nature is a great teacher. A river never stops flowing. If it finds an obstacle in its way in the form of a heavy rock, the river water fights to remove it from its path or finds an alternative path to move ahead. This teaches us to be progressive in life, and keep the fighting spirit alive.

5. Snakes are worshipped as they eat insects in the field that can hurt our crops, thus protecting the grains for us. In fact, whatever we worship is our helper and makes our lives easy for us. There are many such examples in nature, but we are not ready to learn a lesson. Overcome with greed, we are destroying nature. As a result, we face natural disasters like droughts, floods and landslides. We don’t know that nature is angry with us.

6. However, it is never too late to learn. If we learn to respect nature, the quality of our life will improve.

A. What are we taught in our childhood and growing up years ?

B. Why should we respect our parents and teachers ?

C. What message do we get when we worship nature ?

D. How does a river face an obstacle that comes in its way ?

2.2 Give the meanings of the words given below, as used in the passage, with the help of the options that follow :

A game consists of tossing a one rupee coin 3 times and noting its outcome each time. Hanif wins if all the tosses give the same result i.e., three heads or three tails, and loses otherwise. Calculate the probability that Hanif will lose the game.