3. Classification of elements and the periodic table

Class 9thKerala Board Chemistry Part I3. Classification of elements and the periodic table 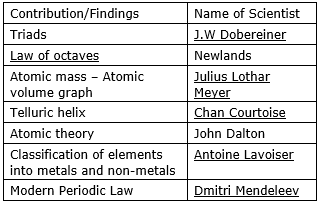 1. The German Chemist, J.W Dobereiner was the first to consider the idea of trends among properties of elements.

i. He made group of three elements each which are having similar properties and called them triads.

ii. He showed that the atomic mass of the middle element was approx. equal to the mean of atomic masses of other two elements.

i. Law of octaves states that “every eighth element has properties similar to the first element”

ii. In modern periodic table, any element of the same period has similar properties.

iii. For Example-Mg and Ca exhibit similar properties as they both belong to the same group.

3. The German scientist Julius Lothar Meyer plotted a graph of atomic volume against the atomic mass of the elements.

i. Elements of same properties remained at same positions.

ii. He concluded that atomic mass is the fundamental property of elements.

i. He arranged the atoms in spirally ascending order of their atomic masses in a cylindrical way.

ii. He noticed that elements of similar properties will line up vertically.

5. John Dalton discovered an Atomic Theory. He concluded that each element has a fixed mass.

The graph of the

On the occasion o