Working with the text

The small gray squirrel became friendly when he found that the boy did not arm himself with a catapult or air gun.

How useful is this solution?We strive to provide quality solutions. Please rate us to serve you better.
PREVIOUSThe old banyan tree “did not belong” to grandfather, but only to the boy, because _________________NEXTWhen the boy started to bring him pieces of cake and biscuit the squirrel ___________________.
RELATED QUESTIONS :

Use the words in the box to speak about the people and the things below, using as … as or –er than

[Notice that in the word ‘hot’, the letter ‘t’ is doubled when –er is added.)

Look at these sentences. Choose would and could to replace the italicized words in the following sentences.

Grandfather says, in the old days,

1. elephants were able to fly in the sky, like clouds. They were also able to change their shapes. They used to fly behind clouds and frighten them. People used to look up at the sky in wonder.

3. like the owl, he was able to see quite well in the dark. He was able to tell who was coming by listening to their footsteps.

Read again the paragraphs of the story in which the author describes the banyan tree and what he used to do there. Is there a place in your house, or in your grandparents’ or uncles’ or aunts’ houses, that you especially like? Write a short paragraph about it, saying

● what you do there

You may instead write about a place you dislike, or are afraid of.

Find words in the story, which show things striking violently against each other.

The words in the box are all words that describe movement. Use them to fill in the blanks in the sentences below.

1. When he began to trust me, the squirrel began ______ into my pockets for morsels of cake.

The word ‘round’ usually means a kind of shape. What is its meaning in the story?

Read the descriptions below of what the snake did and what the mongoose did. Arrange their actions in the proper order. (11, 16) (i) What qualities did the two champions have? Pick out words and phrases from the paragraph above this line in the text and write them down. 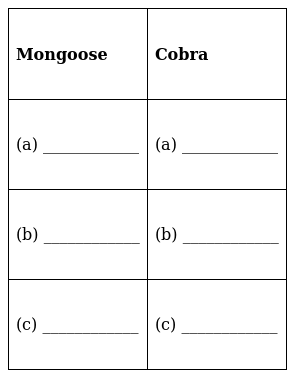 (ii) What did the cobra and the mongoose do, to show their readiness for the fight?

as a fraction with numerator 60.

(a) Ujjain was the gateway to the north-west.

(b) Chandragupta’s ideas were written down in the Arthashastra.

(c) Kalinga was the ancient name of Bengal.

(d) Most Ashokan inscriptions are in the Brahmi script.