The plates of a parallel-plate capacitor are given equal positive charges. What will be the potential difference between the plates? What will be the charges on the facing surfaces and on the outer surfaces?

Two plates of a parallel plate capacitor with equal charge.

Here, both the plates are given same charge +Q. 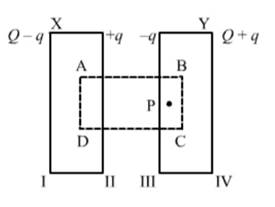 Assume a rectangular Gaussian surface ABCD having area, A as shown in the above fig.

Thus, Electric field at point P due to face I E1=

Electric field at point P due to face II E2=

Electric field at point P due to face III E3=

Electric field at point P due to face IV E4=

negative sign because electric field due to face IV is in leftwards direction).

Since , point P lies inside the conductor thee total electric field at P must be zero

Potential difference b/w the plates is given by

1)Potential difference between the plates=0.

2)Charges on outer faces of plates=+Q.

3)Charges on inner faces of plates=0.

How useful is this solution?We strive to provide quality solutions. Please rate us to serve you better.
PREVIOUSA hollow metal sphere and a solid metal sphere of equal radii are given equal charges. Which of the two will have higher potential?NEXTA capacitor has capacitance C. Is this information sufficient to know what maximum charge the capacitor can contain? If yes, what is this charge? If no, what other information is needed?
Related Videos

A capacitor is made of two circular plates of radius R each, separated by a distance d<<R. The capacitor is connected to a constant voltage. A thin conducting disc of radius r<<R and thickness t<<r is placed at a center of the bottom plate. Find the minimum voltage required to lift the disc if the mass of the disc is m.

A parallel plate capacitor is filled by a dielectric whose relative permittivity varies with the applied voltage (U) as ε = αU where α = 2V–1. A similar capacitor with no dielectric is charged to U0 = 78 V. It is then connected to the uncharged capacitor with the dielectric. Find the final voltage on the capacitors.

The battery remains connected to a parallel plate capacitor and a dielectric slab is inserted between the plates. What will be effect on its (i) potential difference, (ii) capacity, (iii) electric field, and (iv) energy stored?

A parallel-plate capacitor has plate area 20 cm2, plate separation 1.0 mm and a dielectric slab of dielectric constant 5.0 filling up the space between the plates. This capacitor is joined to a battery of emf 6.0 V through a 100 kΩ resistor. Find the energy for the capacitor 8.9 μs after the connections are made.

How many time constants will elapse before the energy stored in the capacitor reaches half of its equilibrium value in a charging RC circuit?

The plates of a capacitor of capacitance 10 μF, charged to 60 μC, are joined together by a wire of resistance 10Ω at t = 0. Find the charge on the capacitor in the circuit at

A capacitor of capacitance 10 μF is connected to a battery of emf 2V. It is found that it takes 50 ms for the charge on the capacitor to become 12.6 μC. Find the resistance of the circuit.