The magnetic field existing in a region is given by

A square loop edge ℓ and carrying a current i, is placed with its edges parallel to the x-y axes. Find the magnitude of the net magnetic force experienced by the loop.

A square loop with-

Length of the edge of a square loop = l

Electric current flowing through it = i

Given in the question that the loop is lies with its edges parallel to the X−Y axes. 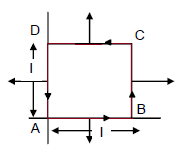 In the fig, arrow shows the direction of force on different sides of the square.

= length of the wire

Force on side AB -

Force on this small element,

Force on the full length of AB,

Force on AB will be acting downwards.

The net force acting vertically will be -

Then, the net horizontal force

How useful is this solution?We strive to provide quality solutions. Please rate us to serve you better.
PREVIOUSSuppose that the radius of cross section of the wire used in the previous problem is r. Find the increase in the radius of the loop if the magnetic field is switched off. The Young modulus of the material of the wire is Y.NEXTA conducting wire of length ℓ, lying normal to a magnetic field B, moves with velocity v as shown in figure.(a) Find the average magnetic force on a free electron of the wire.(b) Due to this magnetic force, electrons concentrate at one end resulting in the electric field inside the wire. The redistribution stops when the electric force on the free electrons balances the magnetic force. Find the electric field developed inside the wire when the redistribution stops.(c) What potential difference is developed between the ends of the wire?
Related Videos 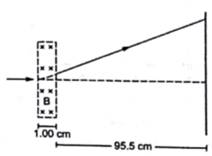