The stage of oogenesis that it represents is the ovulatory stage.

Difference between the two is as follows:

a) The secondary follicle has the theca layer while the corpus luteum does not have it.

b) Layer of granulosa cells are present in the secondary follicle but absent in the corpus luteum. (a) The megaspore mother cell develop into 7-celled, 8 nucleate embryo sac in an angiosperm in the following way:

i) The nucleus of the functional megaspore divides mitotically forming two nuclei that move to the opposite poles, forming the 2-nucleate embryo sac.

ii) Two more mitotic nuclear divisions result in the formation of 4-nucleate and then 8-nucleate stages of the embryo sac.

iii) After the 8-nucleate stage, cell walls are laid down leading to the formation of the typical female gametophyte or embryo sac.

The diagram below shows the nucleate stages of the embryo sac. 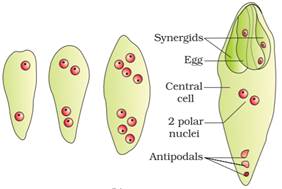 (b) Located in the nucellus, is the embryo sac or known as the female gametophyte.

An ovule generally has a single embryo sac formed from a megaspore.

Labelled diagram of a mature embryo sac is as follows: 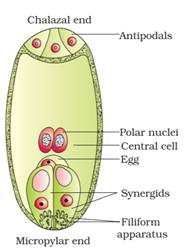