The following is the distance time table of an object in motion: 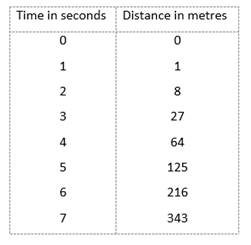 (a) What conclusion can you draw about the acceleration? Is it constant, increasing, decreasing or zero?

(b) What do you infer about the forces acting on the object?

From above, we can conclude that:

(i) When the distance travelled is proportional to time (s ∝ t), then the object has constant velocity.

Hence, acceleration in that case would be zero.

Since, s ∝ t3 (So the acceleration in this case cannot be zero)

(ii) When the distance travelled is proportional to the square of time (s∝t2), then the object has constant acceleration.

Since, s∝t3 (So the acceleration in this case cannot be constant)

(iii) The data given in this question shows that the distance travelled is proportional to the cube of time (s∝t3), therefore, the conclusion drawn is that the acceleration is increasing uniformly with time.

How useful is this solution?We strive to provide quality solutions. Please rate us to serve you better.
PREVIOUSHow much momentum will a dumb-bell of mass 10 kg transfer to the floor if it falls from a height of 80 cm? Take its downward acceleration to be 10 m s-2.NEXTTwo persons manage to push a motorcar of mass 1200 kg at a uniform velocity along a level road. The same motorcar can be pushed by three persons to produce an acceleration of 0.2 m s-2. With what force does each person push the motorcar? (Assume that all persons push the motorcar with the same muscular effort).
Related Videos

Test your knowledge of Laws of motion44 mins

The physical quantity which makes it easier to accelerate a small car than a large is measures in the unit of:

Explain why, a cricket player moves his hands backwards while catching a fast cricket ball.

A car of mass 2400 kg moving with a velocity of 20 m s-1 is stopped in 10 seconds on applying brakes. Calculate the retardation and the retarding force.

Fill in the following blanks with suitable words:

(e) In collisions and explosions, the total ………… remains constant, provided that no external ………… acts.

The rate of change of momentum is: