The embryo sac in

• located in the micropylar end

• Constitute three cells which are grouped together.

• They are two synergids and one egg cell.

• Synergids guide the entry of pollen tube. It has a special cellular thickening at the micropylar tip called filiform apparatus.

• An egg cell has the female gamete.

• Three cells in the chalazal end are the antipodal cells.

• It is a large cell 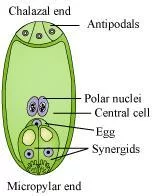 In angiosperms, the seed is the final product of sexual reproduction. It is often described as a fertilized ovule. 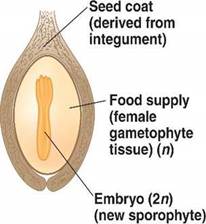 Steps involved in the maturation of an ovule into a seed:

• Integuments of the ovule harden as tough to produce protective seed coats.

• Micropyle remains as a small pore in the seed coat. It facilitates the entry of oxygen and water into seed during germination.

• As seed matures, the water content is reduced and become relatively dry.

• The metabolic activities of the embryo slow down.

• Embry enters into a state of inactivity called dormancy.

In the given diag