1. The Story of Village Palampur

The distribution of farmers in India and the amount of land they cultivate is given in the following graph. Discuss in the class-room. How useful is this solution?We strive to provide quality solutions. Please rate us to serve you better.
PREVIOUSWhy do so many families of farmers cultivate such small plots of land ?NEXTWould you agree that the distribution of cultivated land is unequal in Palampur? Do you find a similar situation for India? Explain.
Related Videos

The Story Of Northern plains37 mins

Quiz | Master The Interconversion of States of Matter53 mins

Exploring The Beauty of Seasons52 mins

Let us take three farmers. Each has grown wheat on his field, though the production is different (see Column 2). The consumption of wheat by each farmer family is the same (Column 3). The whole of surplus of wheat this year is used as capital for next year's production. Also suppose production is twice the capital used in production.

Read the following descriptions and answer the questions that follow:

Kishora is a farm labourer. Like other such labourers, Kishora found it difficult to meet his family's needs from the wages that he received. A few years back, Kishora took a loan from the bank. This was under a government programme which was giving cheap loans to poor landless households. Kishora bought a buffalo with this money. He now sells the buffalo's milk. Further he has attached a wooden cart to his buffalo and uses it to transport various items. Once a week he goes to the river Ganga to bring back clay for the potter. Or sometimes he goes to Shahpur with a load of jaggery or other commodities. Every month he gets some work in transport. As a result, Kishora is able to earn more than what he used to do some years back.

1) What is Kishora's fixed capital?

2) What do you think would be his working capital?

3) In how many production activities is Kishora involved?

4). Would you say that Kishora has benefited from better roads in Palampur ?

The distribution of farmers in India and the amount of land they cultivate is given in the following graph. Discuss in the class-room.

How do the medium and large farmers obtain capital for farming? How is it different from the Small farmers?

Production of pulses and wheat 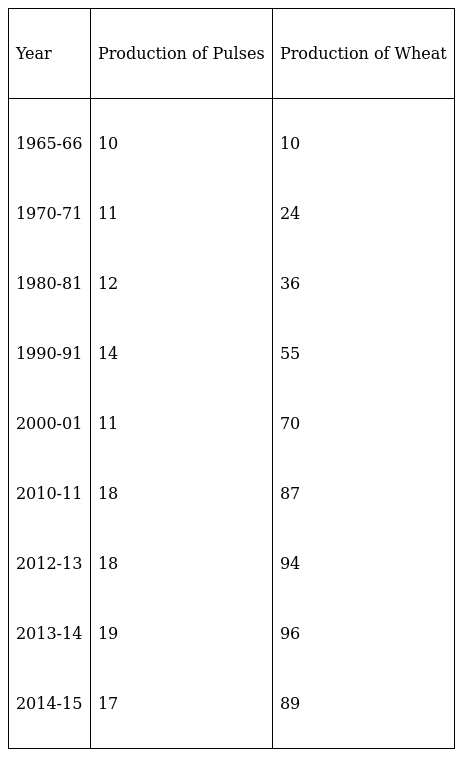 Every village in India is surveyed once in ten years during the Census some of details are presented in the following format. Fill up the following based on information on Palampur.

(b) Total Area of the Village. 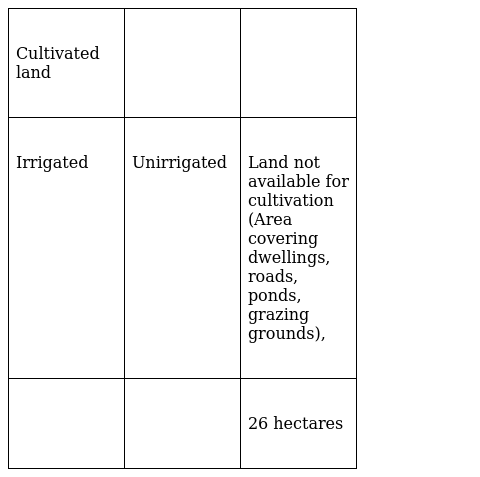 Buildings collapsed at the foothills of the Himalayas because of an earthquake. Before collapsing they were moving forward and backward.

Why was Kezia afraid of her father?

Assertion (A): Human resource is necessary for the progress of any country.

Reason (R): Investment in education and health of people can result in a high rate of returns in the future for a country.

Who were the people in Kezia’s family?

Give the equations of two lines passing through (2, 14). How many more such lines are there, and why?

Identify the wrong pair and rewrite the corrected one.

Write answers to the following questions and explain your answers.

Explain how the element sodium is monovalent.