The diagram given below represents a certain phenomenon which occurs during meiosis. Name and explain the phenomenon by using the terms - homologous chromosomes, chromatids, crossing-over. 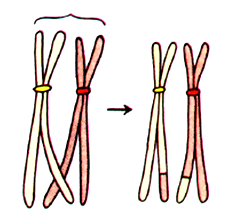 How useful is this solution?We strive to provide quality solutions. Please rate us to serve you better.
PREVIOUSDraw a labelled diagram to show the metaphase stage of mitosis in an animal cell having '6' chromosomes.NEXTGiven below is a diagram representing a stage during mitotic cell division in an animal cell.Examine it carefully and answer the questions which follow.(a) Identify the stage. Give one reason in support of your answer.(b) Name the cell organelle that forms the 'aster'.(c) Name the parts labelled 1, 2 and 3.(d) Name the stage that follows the one shown here.How is that stage identified?(e) Mention two differences between mitosis and meiosis with regard to:(i) The number of daughter cells produced.(ii) The chromosome number of the daughter cells.
Related Videos