(a) The phase is ventricular systole & auricular diastole.

Explanation: The phase is ventricular systole as it is shown in the diagram above that both the ventricles are contracting & the tricuspid & bicuspid valves are closing. It shows auricular diastole as atria draws in blood through the openings of venacava & pulmonary vein.

(b) Ventricles are contracting in this phase as systole itself means the contraction phase of the heart. During this blood passes into aorta & pulmonary artery through semiluy valves.

(c) The following parts as mentioned as given in the diagram: 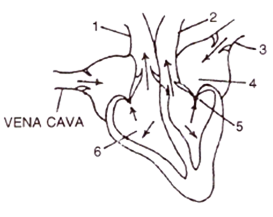 2 : Aorta (blood vessel carrying oxygenated blood from left ventricle to all parts of the body)

5 : Bicuspid valve (valve having two cusps present at the aperture between right auricle and right ventricle)

6 : Right ventricle (chamber of heart receiving de oxygenated blood from all parts of body via venacava)

How useful is this solution?We strive to provide quality solutions. Please rate us to serve you better.
PREVIOUSThe figures givenNEXTGiven below is a
Related Videos