Water is that resource that has enabled living organisms to exist on this planet, no wonder the Earth is called a blue planet. But this resource though renewable is in limited quantity. Our requirement, with increasing population and negligent water management, is slowly eating into the nature’s recycling capacity. We are using more than the nature can purify, at the same time we are rendering water difficult to recycle. All this means that, though renewable, water is slowly becoming scarce.

Seventy-one percentage of Earth is covered in water, but 69% of it is unfit for consumption – it is saline. Of the 3% freshwater, around 68% is inaccessible as it is locked in Glaciers and Ice Caps, 30% of freshwater is available as groundwater and the rest 1% is found in rivers. All the people, therefore, live on less than 1% of Earth’s water, and the later variable is fixed, added to this is the serious mismanagement of available freshwater. Thus, human population is bound to stretch the limits one day. 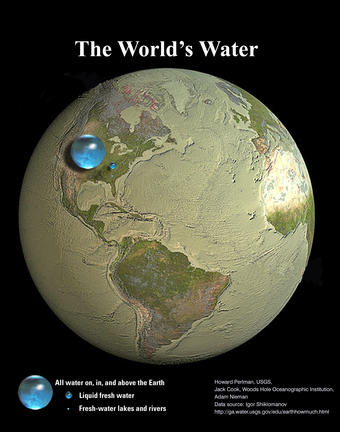 With over 7.6 Billion inhabitants, strain on water resource has been felt over the last few decades. Added to this is the variability of freshwater over time and space. Communities, regions and states from local level to international are disputing over sharing and control of water resources. The on-going conflict between Karnataka and Tamil Nadu over the sharing of Cauvery waters is a prime example. At the international level, the Indus Water Treaty has been a geopolitical leverage for India to pressurise Pakistan. Inland freshwater seas like Aral Seas and others have been dwindling in size. As someone had truthfully pointed out – the next World War will break out over the control of this scarce resource.

Human civilisation began around major river valleys, the prominent among them was the Mesopotamian Civilisation that grew around the rivers Euphrates and Tigris in the Middle East. To understand the strain on water, it is sufficient to look at the condition of these rivers. Attached is a link to an informative documentary on “Why Iraq’s Great Rivers are Dying”. (https://bit.ly/2XQK6ij)

Relation R in the

If x and y are co