As the road is frictionless, it is impossible to increase the linear velocity until there exist a force in the linear direction. The engine can only increase angular speed.

How useful is this solution?We strive to provide quality solutions. Please rate us to serve you better.
PREVIOUSA wheel of radius 20 cm is pushed to move it on a rough horizontal surface. It is found to move through a distance of 60 cm on the road during the time it completes one revolution about the center. Assume that the linear and the angular accelerations are uniform. The frictional force acting on the wheel by the surface isNEXTA solid sphere, a hollow sphere and a disc, all having same mass and radius, are placed at the top of a smooth incline and released. Least time will be taken in reaching the bottom by
Related Videos

Questions based on rotational motion44 mins

A solid sphere is set into motion on a rough horizontal surface with a linear speed u in the forward direction and an angular speed u/R in the anticlockwise direction as shown in figure (10-E 16). Find the linear speed of the sphere (a) when it stops rotating and (b) when slipping finally ceases and pure rolling starts.

A hollow sphere of radius R lies on a smooth horizontal surface. It is pulled by a horizontal force acting tangentially from the highest point. Find the distance travelled by the sphere during the time it makes one full rotation.

A uniform rod of mass m and length l is struck at an end by a force F perpendicular to the rod for a short time interval. Calculate

A uniform rod pivoted at its upper end hangs vertically. It is displaced through an angle of 600 and then released. Find the magnitude of the force acting on a particle of mass dm at the tip of the rod when the rod makes an angle of 370 with the vertical.

A small disc is set rolling with a speed u on the horizontal part of the track of the previous problem from right to left. To what height will it climb up the curved part?

A sphere of mass m rolls on a plane surface. Find its kinetic energy at an instant when its center moves with speed u.

A small spherical ball is released from a point at a height h on a rough track shown in figure (10-E13). Assuming that it does not slip anywhere, find its linear speed when it rolls on the horizontal part of the track.

The variation of angular position θ, of a point on a rotating rigid body, with time t is shown in Fig. 7.7. Is the body rotating clock-wise or anti-clockwise? 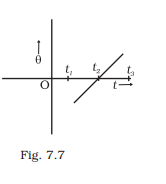 Find the mean and variance for the following frequency distributions in Exercises.

Find the mean and variance for the following frequency distributions in Exercises.