Study the graphs given in fig 4.4 and answer the following questions.

(i) In which month is the highest temperature found in all the four cities?

(ii) In which month does it rain the most in the given cities?

(iii) When does Brazil have its rainy season?

(iv) Which city has the maximum range of temperature? How much is it?

(v) What type of climate will be found in Rio De Janeiro?

(i) The highest temperature in:

(ii) The highest rainfall in:

(iii) Brazil has its rainy season during the months of December to April.

(iv) Porto Alegre has the highest range of temperature, ranging from 30 to 140 degrees Fahrenheit.

How useful is this solution?We strive to provide quality solutions. Please rate us to serve you better.
PREVIOUSWith the help of the internet, obtain information regarding the annual average temperatures of the continental location of Brasilia and Bhopal and explain it with the help of a graph.NEXTConsidering the various factors affecting Brazil’s climate, complete the adjoining table.
Try our Mini CourseMaster Important Topics in 7 DaysLearn from IITians, NITians, Doctors & Academic Experts
Dedicated counsellor for each student
24X7 Doubt Resolution
Daily Report Card
Detailed Performance Evaluation
view all courses

Describe in brief the changes occurring in the climatic conditions of India while going from south to north.

State whether right or wrong. Rewrite the wrong sentences.

(a) The fact that Brazil lies on the equator affects its climate in a big way.

(b) India and Brazil have the same seasons at the same time.

(d) Brazil gets a lot of rainfall because of the southwest monsoon winds.

Write the names of the States/Regions inappropriate columns:

(Note: Can you think of an easier method of answering this question?)

Explain the importance of the Himalayas and the Indian Ocean with respect to the climate of India.

India receives precipitation from the North-East Monsoon winds too.

Discuss the factors affecting the climate of Brazil.

Study the graphs given in figure 4.5 and answer the following questions: 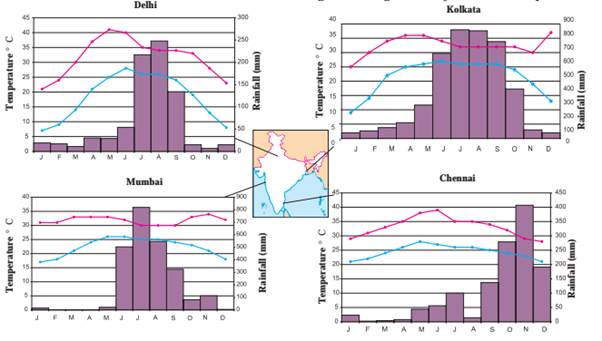 1. What difference do you find in the rainy seasons of Chennai and other cities of India? Why?

2. What similarity do you see in the temperature curves of Delhi and Kolkata?

3. Calculate the average range of minimum and maximum temperatures of all the four cities.

4. In which city is the range minimum? What can you infer from this?

5. In which city is the range maximum? What can you infer from this about its climate?

6. Based on the temperature and rainfall of Mumbai, comment upon its climate.

7. In which month does India experience the highest rainfall?

8. Classify the cities as cities with equable and extreme climates.

With the help of the internet, obtain information regarding the annual average temperatures of the continental location of Brasilia and Bhopal and explain it with the help of a graph.

All In One Science 867 views
Q