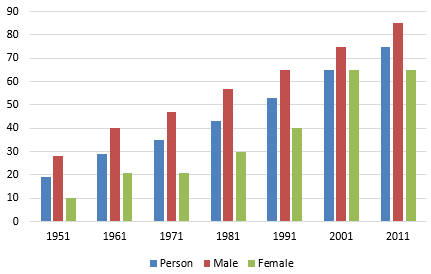 1. Has the literacy rates of the population increased since 1951?

2. In which year India has the highest literacy rates?

3. Why literacy rate is high among the males of India?

4. Why are women less educated than men?

5. How would you calculate literacy rate in India?

6. What is your projection about India's literacy rate in 2010?

1. Yes, the literacy rates of the population have increased from 18% in 1951 to 74% in 2010-11. Literacy is not only a right, it is also needed if the citizens are to perform their duties and enjoy their rights properly. A vast difference is noticed across different sections of population. Literacy among males is higher than females and in urban areas higher then rural areas.

3. Literacy rate is high among the males of India because of the comparative regularity in males’ education system. Women are not preferred to be given education in many places because of erred social and economic beliefs.

4. Women are less educated than men because their education is not in regular form and sometimes no education is provided them at all. Being a male dominated society, it is still considered in some areas that literacy is not that important for women and only men need it; especially in the rural areas.

5. In India literacy rate is calculated by dividing the number of literate persons with total population and multiplied by 100. Literacy rate refers that how many people in a country or state are there who are literate and remaining is total population which includes all whether the person is literate or not.

6. 80% in 2010 is India’s literacy rate according to my projection. If literacy rates will rise to 80% then it can be considered a vast change in the field of education. It will help people in many ways like in improving living standard, maintaining hygiene and other things.

How useful is this solution?We strive to provide quality solutions. Please rate us to serve you better.
PREVIOUSRead the following passages and answer the questions that follow:Story of SakalThere were two friends named Vilas and Sakal. They both lived in the same village named Semapur. Sakal was twelve years old boy and his mother Sheela looked after domestic works. His father name was Buta Chaudhary, who worked in an agricultural field. Sakal used to help his mother in domestic works and besides helping his mother he looked after his younger siblings Jeetu and Seetu. His uncle had passed matriculation but he had no job he sat idle at home. So Sakal’s mother and father wanted him to study very carefully. They forced him to join the school in the village and he joined. As per his parents’ wish he started studying and completed his higher secondary examination, after this his father persuaded him to continue his studies. He applied for a loan for Sakal’s study in computer. He was very hardworking and interested in studies from the very beginning. So as his higher secondary examination he completed his vocational course and got a job in a private firm. He designed new kind of softwares which helped him to increase the sale of the firm. He was appreciated by his boss all the time and got promotion.Story of VilasVilas was a boy of eleven years living in the same village as Sakal. His father was a fisherman. Suddenly, his father passed away when Vilas was only two years old. After his father’s death his mother Geeta started selling fish to earn and to feed the family. She bought fish from the landowner’s pond and sold it in the nearby mandi, by which she could earn only Rs. 20 to 30 a day. Vilas became a patient of arthritis and his mother could not afford to take him to a doctor because of their poverty. Because of being the patient he could not go to school and was not interested in studied as his friend Sakal was. He used to help his mother in cooking and also looked after his younger brother Mohan. One day his mother fell ill and there was no one to look after her, there was no one to support them. So in this situation Vilas was forced to sell fish in the same village as his parents did. Like his mother and father he earned very little money.Do you notice any difference between the two friends? What are these?NEXTDiscuss this table in the classroom and answer the following questions:Number of Institutions of Higher Education, Enrolment and FacultySource: UGC Annual Report 1996-97 and 1998-99 and Selected Educational Statistics, Ministry of HRD.1. Is the increase in number of colleges adequate to admit the increasing number of students?2. Do you think we should have more number of universities?3. What is the increase noticed among the teachers in the year 1998-99?4. What is your idea about future colleges and universities?
Related Videos

If this is not possible, ask your neighbor what is their profession? In which of the three sectors will you categories their work?

Discuss this table in the classroom and answer the following questions:

Number of Institutions of Higher Education, Enrolment and Faculty 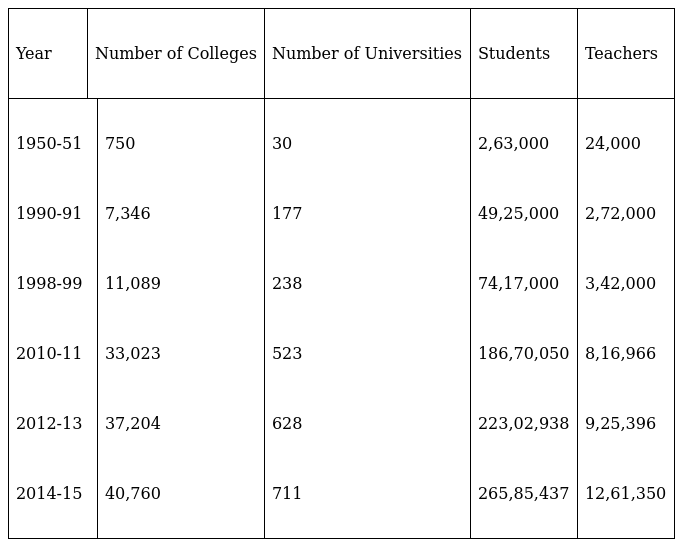 2. Do you think we should have more number of universities?

4. What is your idea about future colleges and universities?

Visit a nearby hospital, either government or private and note-down the following details:

(i) How many beds are there in the hospital you have visited?

(ii) How many doctors are there in the hospital?

(iii) How many nurses work in that hospital?

Besides try to gather the following additional information:

(iv) How many hospitals are there in your locality?

(v) How many dispensaries are there in your locality?

1. Has the literacy rates of the population increased since 1951?

2. In which year India has the highest literacy rates?

3. Why literacy rate is high among the males of India?

4. Why are women less educated than men?

5. How would you calculate literacy rate in India?

6. What is your projection about India's literacy rate in 2010?