No, the statement is false. An inflationary gap exists when aggregate demand is greater than aggregate supply at full employment level. The inflationary gap is the gap between the actual output and the potential output in the economy. It is the difference between the actual output and the planned expenditure during a period of time in the economy. The actual output is determined by the employment and the level of technical progress. The planned expenditure is determined by the level of savings and taxation in the system.

The inflationary gap or the expansion gap determines the difference between the actual output and the potential output. 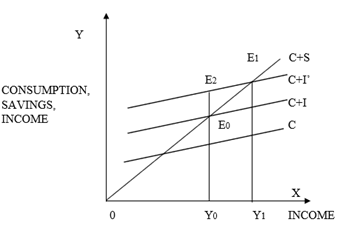 In the following diagram, the level of income in the economy is Y0 at the point of intersection of the C+I and the C+S curves. The equilibrium point at Y0 level of income is E0. When the total investment expenditure in the economy increases, the consumption curve shifts upwards and forms the C+I’ curve. The equilibrium point will be E1 with the equilibrium income being Y1 at the intersection of the C+S curve and the C+I’ curve.

No, the statement is false. Average Propensity to Consume (APC) can never be negative. The total income of the consumer can be divided between consumption and savings. Savings is the residue available with the consumer after providing for consumption expenditure.

Mathematically, consumption function can be expressed as:

C=a+ bY; C- level of consumption

b- Marginal Propensity to Consume (MPS)

Y- the level of income 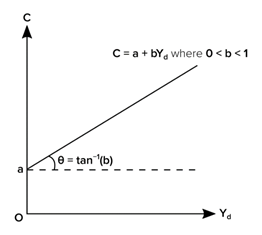