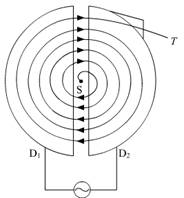 Principle- Cyclotron is a device that works on the principle that a charged particle moving with a certain velocity in a direction perpendicular to the magnetic field experience Lorentz force, as a result, the particle describes a circular motion.

A charged particle can be accelerated to very high energy by making it pass through a moderate electric field a number of times. This can be done with the help of perpendicular magnetic field which throws the charged particle into the circular motion, the frequency of which does not depend on the speed of the particle and radius of the circular orbit.


Inside the Dees, the particle is shielded from the electric field and magnetic field acts on the particle and makes it move in circular path.


The increased energy increases due to radius of the circular path. So accelerated particles move in spiral path.


Suppose the charge on the positive ion is +q ,its mass ‘m’ and strength of magnetic field is B.


Let, at any time, the radius of circular path is ‘r’ and speed of positive ion is ‘v’.


Then, equating the Lorentz’s force and centripetal force we get,

time taken to complete circle of radius ‘r’ is,

Substituting the value of r we get,

. So substituting the value in above equation we get,

This is the required expression.

A. Obtain the exp

In a cyclotron, a