Class 9thAll In One - Science3. Atoms and Molecules

The two important laws of chemical combination are:

i) Law of constant proportion:

The law states that “in a chemical substance, the elements are always present in definite proportions by mass.

For example: In ammonia (NH3), nitrogen and hydrogen are always present in the ratio of 14:3 by mass, whatever the method

or source from which it is obtained.

In water, hydrogen and oxygen are always present in the ratio of 1:8 by mass, whatever the method or source from which water is obtained.

ii) Law of conservation of mass:

Sum of mass of reactants = Sum of masses of prodcuts

How useful is this solution?We strive to provide quality solutions. Please rate us to serve you better.
PREVIOUSYou are asked by your teacher to buy 10 moles of distilled water from a shop where small bottles each containing 20 g of such water are available. How many bottles will you buy?NEXTGive a brief description of the following:(i) Relative atomic mass(ii) Atomic mass unit(iii) Ions(iv) Ionic compound(v) Atomicity
Related Videos

Champ Quiz | Are you a Master of Mole Concept ?35 mins

Quiz on Be a Master of Mole Concept in 30 Minutes!35 mins

Why & How Elements Combine?46 mins

With the help of example, explain the law of conservation of mass.

What is meant by the law of conservation of mass? If 12 g of C is burnt in the presence of O2, how much CO2 will be formed?

20g silver nitrate solution is added to 20g of sodium chloride solution. What change in mass do you expect after the reaction and why?

Which postulate of Dalton’s atomic theory can explain the law of constant proportions?

A liquid compound X of molecular mass 18 u can be obtained from a number of natural sources. All the animals and plants need liquid X for their survival. When an electric current is passed through 200 grams of pure liquid X under suitable conditions, then 178 grams of gas Y and 22 grams of gas Z are produced. Gas Y is produced at the positive electrode whereas gas Z is obtained at the negative electrode. Moreover, gas Y supports combustion whereas gas Z burns itself causing explosions.

(c) Which law of chemical combination is illustrated by this example?

(e) State an important use of Y in our life.

One of the forms of a naturally occurring solid compound P is usually used for making the floors of houses. On adding a few drops of dilute hydrochloric acid to P, brisk effervescence are produced. When 50 g of reactant P was heated strongly, than 22 g of a gas Q and 28 g of a solid R were produced as products. Gas Q is the same which produced brisk effervescence on adding dilute HCl to P. Gas Q is said to cause global warming whereas solid R is used for white-washing.

(c) How does the total mass of Q and R formed compare with the mass of P taken?

(d) What conclusion do you get from the comparison of masses of products and reactant?

(e) Which law of chemical combination is illustrated by the example given in this problem?

The experiment is repeated three times and data tabulated as shown below:

In a compound such as water, the ratio of the mass of hydrogen to the mass of oxygen is always:

The correct observation is that of student.

ABCD is a rectangle in which diagonal AC bisects ∠A as well as ∠C Show that:

(i) ABCD is a square

If the work done by a body on application of a constant force is directly proportional to the distance travelled by the body, express this in the form of an equation in two variables and draw the graph of the same by taking the constant force as 5 units. Also read from the graph the work done when the distance travelled by the body is (i) 2 units (ii) 0 unit

Draw the graph of each of the following linear equations in two variables:

Look at the following sentences. They each have two clauses, or two parts each with their own subject and verb or verb phrase. Often, one part (italicized) tells us when or why something happened.

(i) I reached the market when most of the shops had closed. (Tells us when I reached).

(iii) The telephone rang and Ganga picked it up. (Tells us what happened next.)

Identify the two parts in the sentences below by underlining the part that gives us the information in brackets, as shown above.

(1) Where other girls wore traditional Indian dresses, Santosh preferred shorts. (Contrasts her dress with that of others)

(2) She left home and got herself enrolled in a school in Delhi. (Tells us what happened after the first action.)

(4) Little Maria had not yet celebrated her tenth birthday when she was packed off to train in the United States. (Tells us when Maria was sent to the US.)

Do you find this story funny? What are the humorous elements in it'?(Pick out at least three; think about what happens, as well as how it is described.)

Define valency by taking the examples of silicon and oxygen.

Working in small groups of 4-5 students, go back over the two passages on Santosh Yadav and Maria Sharapova and complete the table given below with relevant phrases or sentences. 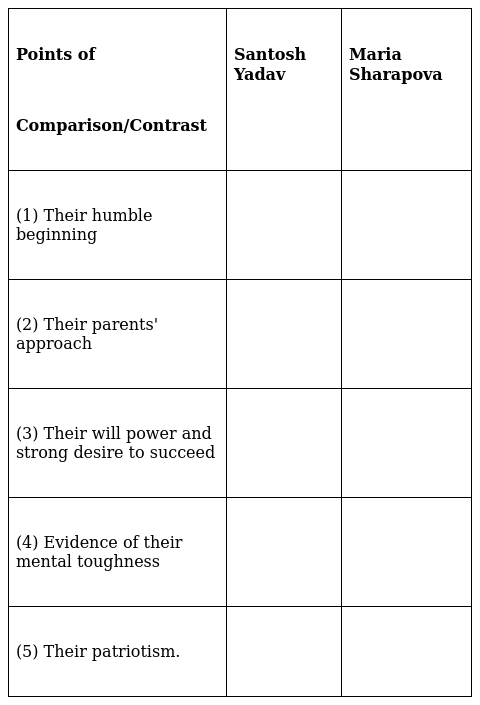