State the rule to

(i) Maxwell’s Right Hand Thumb Rule:
The- direction of the magnetic field produced by a current-carrying conductor is given by Maxwell’s right hand thumb rule. 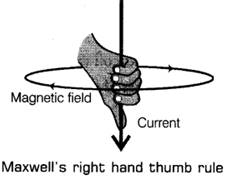 (ii) Fleming’s Left Hand Rule:
The direction of force which acts on the current-carrying conductor placed in a magnetic field is given by Fleming’s left hand rule. 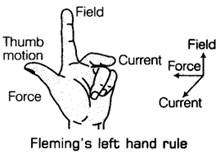 (iii) Fleming’s Right Hand Rule:
The direction of induced current in a straight conductor is given by Fleming’s right hand rule.
It states that if we stretch the thumb, forefinger and the middle finger of right hand at right angles to one another in such a way that the forefinger points in the direction of magnetic field. 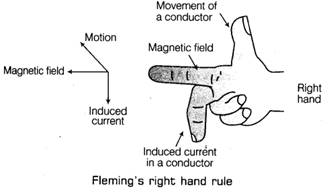 A fuse is nothing more than a short length of wire designed to melt and separate in the event of excessive current. Fuses are always connected in series with the component(s) to be protected from over current, so that when the fuse blows (opens) it will open the entire circuit and stop current through the component(s). A fuse connected in one branch of a parallel circuit, of course, would not affect current through any of the other branches.

The fuse is rated for a certain maximum current and blows off when a current more than the rated value flows through it.

If a fuse is replaced by one with larger ratings, the appliances may get damaged while the protecting fuse does not burn off. This practice of using fuse of improper rating should always be avoided.

How useful is this solution?We strive to provide quality solutions. Please rate us to serve you better.
PREVIOUSGiven that RNEXTWrite the names a
Related Videos