Immunity: The overall ability of the host to fight the disease- causing organisms, conferred by the immune system is called Immunity.

Acquired immunity: is pathogen specific. Immunity that develops after exposure to a suitable agent.

This means our Hbodywhen it encounters a pathogen for the first time produces a response called Primary response. Subsequent encounter with the same pathogen elicits a highly intensified secondary response.

The B-lymphocytes produce many proteins in response to pathogens into our blood to fight with them. These proteins are called Antibodies.

The T-cells themselves do not secrete antibodies but help B cells produce them. Each antibody molecule has four peptide chains, two re called Light chains and two long ones are called Heavy chains. 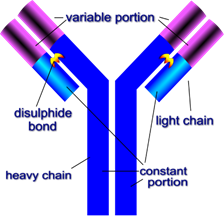 Hence, an antibody is represented as H2L2. Because these antibodies are found in the blood, the response is also called Humoral immune response, this is one type of acquired immune response.The second type is called CMI (Cell mediated immune response). The T-lymphocytes mediate CMI.

Once formed in the bone marrow, T progenitor cells migrate to the thymus to mature and become T cells. While in thymus, the developing T cells starts to express TCRs ( T cell receptors) and other receptors called CD4 and CD8. All T cell express Tcell receptors and either CD4 or CD8 but not both.

T cell receptors can only recognise antigens that are bound to certain receptor molecules, called as MHCl (Major Histocompatibility complex class I) and class 2 (MHCll).

CD4 and CD8 play a role in T cell recognition and activation by binding to either MHCl or MHCll.

Mature T cells should recognise only foreign antigens combined with self MHC molecule in order to mount an appropriate immune response.

In order to make sure T cells will perform properly once they have matured and have been released from the thymus, they undergo two selection process

1. Positive selection- ensures MHC restriction by testing the ability of MHCI and MHCII to distinguish between self and non self proteins.

There are three types of Mature T-cells:

A. Helper T-cells: express CD4, and help with the activation of Tc cells , B-cells and other immune cells.

B. Cytotoxic cells: express CD8 and are responsible for removing pathogens and infected host cells.

C. T regulatory cells- express CD4 and CD25 receptor. These cells helps to distinguish between self and non-self molecules, and by doing so reduce the risk of autoimmune disease.

How do cytokine b