3. Reflection of light by different surfaces

State the laws of reflection of light. (AS1)

The Laws of Reflection states that:

First law : The angle of incidence is equal to the angle of reflection (i = r).

Second law : The incident ray, reflected ray and the normal at the point of incidence are in the same plane. This plane is called the plane of incidence. 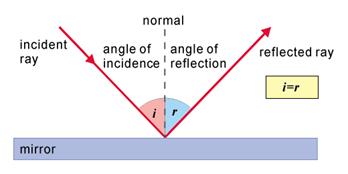 How useful is this solution?We strive to provide quality solutions. Please rate us to serve you better.
NEXTHow do you find the focal length of a concave mirror? (AS1)
Related Videos

Light and it's Reflection58 mins

Find the plane of the reflection experimentally for the incident ray which passes through the heads of the pins pierced in front of the mirror. (AS3)

How do you verify the 2nd law of reflection of light with an experiment? (AS3)

State the laws of reflection of light. (AS1)

How do you verify the 1st law of reflection of light with an experiment? (AS3)