State the law of multiple proportions.

This law states that when two elements combine with each other to form more than one compound, the weights of one element that combine with a fixed weight of the other are in a ratio of small whole numbers.

How useful is this solution?We strive to provide quality solutions. Please rate us to serve you better.
PREVIOUSCa2+ has completely filled outer shell. Justify your answer.NEXTList the uses of isotopes?
Related Videos

ii) 0.716 gram of metal oxide II contains 0.636 gram of metal. So that the above data agrees with the law of multiple proportions.

2. Positive Charge mass at the core of the atom

3. An atom whose valency is zero

1. Electrons present in the outermost shell

3. An atom that does not have neutron

4. Scattering of α particles in the gold foil experiment

Copy the following and write the names of the laws and their simple definitions in the space provided. 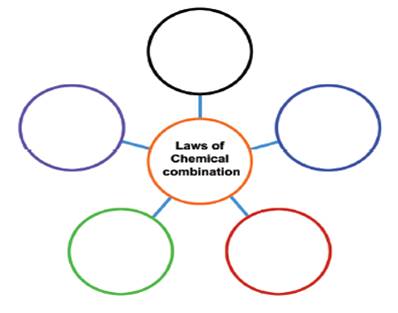 State the law of multiple proportions.