As plants grow older, the outer protective tissue undergoes certain changes. A strip of secondary meristem replaces the epidermis of the stem. The outer layer of young tree stem is made up of living cells called epidermis. 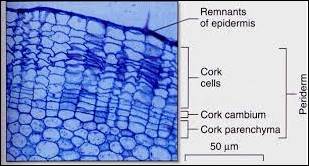 Cells on the outside are cut off from this layer. This forms the several-layer thick cork or bark of the tree. Cells of bark are dead and compactly arranged without intercellular spaces. They also have a chemical substance called suberin that makes them impervious to gases and water.

Both bark and epidermis forms the components of simple permanent tissue whose main function is in protection. In the woody plants the epidermis of the stem is replaced by periderm.

• Major component is the cork and

How useful is this solution?We strive to provide quality solutions. Please rate us to serve you better.
PREVIOUSWhich components NEXTDescribe an activ
Related Videos

Get To Know About Nervous Tissue38 mins