White light is a mixture of seven colors, red, orange, yellow, green, blue, indigo and violet. The dispersion of white light occurs because colors of white light travel at different speeds through the glass prism. The amount of refraction depends on the speed of colored light in glass.

• When white light consisting of seven colors falls on a glass prism, each color in it is refracted by a different angle, with the result that seven colors are spread out to form a spectrum. The red light bends the least, while violet bends the most. Newton's experiment with two identical prisms:


• He then placed a second identical prism in an inverted position with respect to the first prism. This allowed all the colors of the spectrum to pass through the second prism. He found a beam of white light emerging from the other side of the second prism. 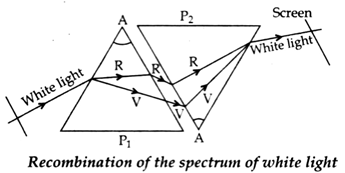