Class 9thTogether with Science9. Force and Laws of Motion

According to the law of conservation of momentum

•So, Momentum is never created or destroyed.

•We can apply this law for a collision between two vehicles. This law is applicable for all types of collisions.

•Consider two particles say A and B of mass m1 and m2 collide with each other and forces acting on these particles are only the ones they exert on each other.

•Let u1 and v1 be the initial and final velocities of particle A and similarly, u2 and v2for particle B. Let the two particles be in contact for a time t.

•During the collision, let A impart an average force equal to FBA on B and let B exert an average FABon A. We know that from third law of motion FBA=FAB eq.(4)
Here, 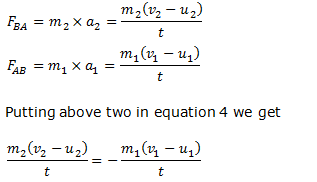 How useful is this solution?We strive to provide quality solutions. Please rate us to serve you better.
PREVIOUS(a) Write an actiNEXTSonam was reading
Related Videos

Quiz | Become a Master of Conservation of Momentum32 mins

What are the pecu