Class 8thAll in One - Science16. Light

Periscope is used by a soldier while sitting in a bunker to see the things outside. Periscope make use of two plane mirror.

Periscope: A periscope is an instrument which helps in viewing the objects which are not in the line of sight of the observer. It is used in the submarines to look at objects above the water surface.

The principle behind periscope is reflection between two parallel plane mirrors. It consists of long cylindrical hollow tube bent at right angles and two plane mirrors are kept parallel and facing each other. The mirror is fixed at 45 degrees with the framework at the top and the bottom of the tube. 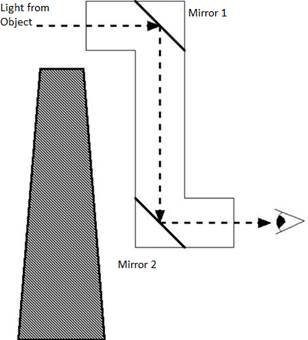 How useful is this solution?We strive to provide quality solutions. Please rate us to serve you better.
PREVIOUSIs laws of reflecNEXTDetermine the num
Related Videos

Quiz | Lets Have a Faceoff with Light!!37 mins

Can You Split White Light?41 mins

What are Spherical Mirrors?39 mins

State one use of

A student makes a

A ray of light st

Explain how, a ha

Do you think it i