Side of hexagon = l

The force on the masses will be the resultant of the forces of all the other masses. Let the masses be m each. Now the distance AC is given by the parallelogram law i.e. 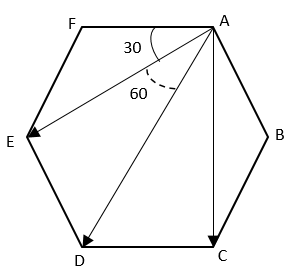 Now, for AD we have

Now the force on mass at A due to b is

The force on mass A due to C is

Also due to symmetry, we have

Now, the forces Fae and Fac make equal angles with the direction AD viz. 30°, and therefore by parallelogram law of vector addition their resultant is along AD and therefore the magnitude of the resultant,

Similarly, Fab and Faf also make equal angles with AD viz. 60° and therefore they are also along AD and

Therefore, the net force on mass at A will be

How useful is this solution?We strive to provide quality solutions. Please rate us to serve you better.
PREVIOUSA star like the sNEXTA satellite is to
Try our Mini CourseMaster Important Topics in 7 DaysLearn from IITians, NITians, Doctors & Academic Experts
Dedicated counsellor for each student
24X7 Doubt Resolution
Daily Report Card
Detailed Performance Evaluation
view all courses

How is the gravit

We can shield a c

What were the mai