Show how would yo

Given: Three resistors, each of resistance 9Ω

The objective of the question is to arrange the resistor in such a way that the equivalent resistance of the circuit is equal to following values,

If we arrange the two resistors in parallel and the third resistor in series, the equivalent resistance of the combination will be equal to 13.5 Ω.

The equivalent resistance of the parallel combination of the two resistors is given by,

Therefore, upon substituting the value of R1 and R2 in Req, it is equal to 4.5 Ω

Similarly, If we put 2 resistors in series, parallel with the third resistor, the equivalent

of the resultant combination will be equal to 6 Ω. 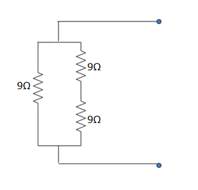 (a) Joule’s law of heating explains the amount of heat generated due to current within a wire, its mathematical expression can be explained in following cases;

(i) It is directly proportional to the square of current for a given value of resistor and for a fixed period of time,

(ii) When the heat dissipated is proportional to the resistance for a given current and for a fixed period of time,

(iii) It is directly proportional to the time for which the current flow across the resistance,

When all these conditions are merged together, the resulting expression for heat dissipation is,

(b) Given: Two lamps, let’s say A and B, with following power and voltage rating are given;

We need to determine the current drawn by the bulbs from the line, if the supply voltage is equal to 220V.

As we know the power dissipated by a bulb is a product of voltage and current, so it can be written as,

So the current drawn by the bulb from the 220V supply is equal to,

Similarly, for bulb B,

How useful is this solution?We strive to provide quality solutions. Please rate us to serve you better.
PREVIOUSState the laws ofNEXTA. List the facto
Related Videos

Show how would yo